An energy saving blockchain facilitating cooperation instead of competition.
With FairCoin there is a new generation of cryptocurrency and blockchain functionality. ‘Proof of Cooperation’ (PoC) is the unique consensus algorithm developed for FairCoin. In contrast to other cryptocurrencies FairCoin does not implement any mining or minting functionality, which are only needed for competitive systems. Instead, so called ‘Collaboratively Validated Nodes‘ (CVNs) cooperate to create new blocks and to secure the network. The money supply has been frozen at 53,193,831 FAIR and can not further be changed by creating blocks.

How ‘Proof of Cooperation’ algorithm works

On July 18th 2017 the new ‘Proof of Cooperation’ algorithm was introduced to FairCoin and with this an energy-saving blockchain which facilitates cooperation instead of competition. With the innovative PoC algorithm block creation and network security is made by ‘Collaboratively Validated Nodes‘.

The consensus rules determine which CVN has to create the next block. Each CVN approves that CVN by digitally signing a piece of data which contains its unique ID. After the respective CVN has received all the necessary signatures, it takes pending transactions and forms a new block which is then stored in the immutable and distributed blockchain database.

Block-creation is effortless, that‘s why CVNs can be run on a Raspberry3 which consumes only a couple of watts and does not waste energy or computing resources. Even if the network of CVNs grows, the power consumption will remain negligibly low.

Technical insights into the mechanism of FairCoin

Our white paper gives answers on considerations and the PoC blockchain mechanims. Click on the abstract to download the full version. 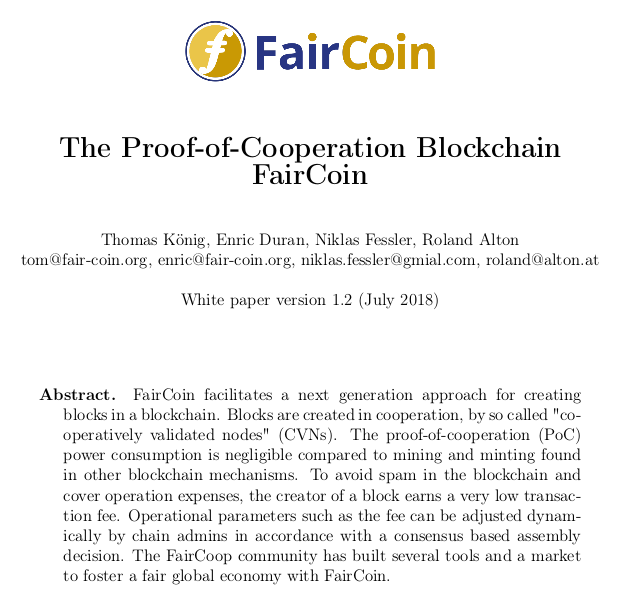 The ‘Proof of Cooperation‘ innovation makes FairCoin more fair, secure, and sustainable than any other blockchain-based currency.

So, here is the 3rd revised version of the FairCoin V2.0 white paper. Enter the fair dimension of cryptocurrency and download the PDF file now.

FairChains – a blockchain for everyone

The FairChains project makes it possible for everyone to start their own energy-saving blockchain for various use cases. For instance, you can implement a social currency or a crowd investment campaign.

FairChains is built on top of the FairCoin open source core wallet software. Each new FairChain has its own set of properties to easily adopt to every use case.

Our block explorer shows all FairCoin transactions in the public blockchain. Needs some deeper knowledge in cryptocurrencies to understand this "public ledger".

Here you see the CVNs, which decide in a round-robin-manner, which one is creating the next block.

Help us to extend our network of Collaboratively Validated Nodes (CVNs). We run 20, target is 30.