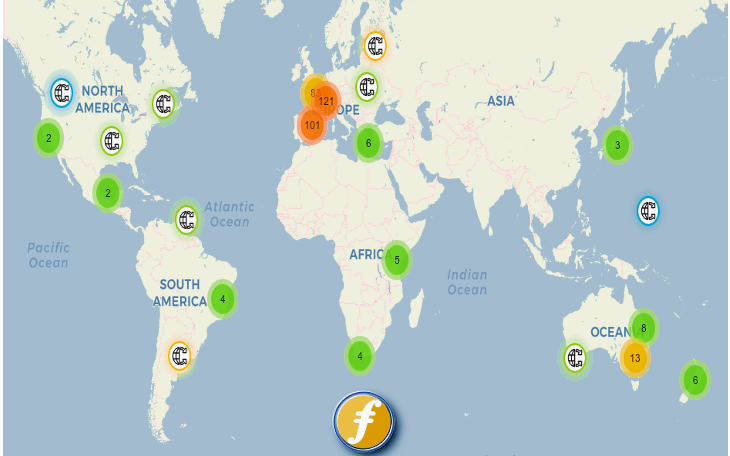 From local to global to local

For those involved in alternative currency projects, these are exciting times. In the 10 years since the 2008 financial crisis that showed debt driven growth was socially unsustainable, we have seen banks and governments become still more reliant on debt driven growth. And, at the same time, we are seeing increasing scientific consensus that this debt driven growth model will lead to an environmental catastrophe that we are increasingly likely to experience over the course of our own lives, but which will definitely be experienced by our children and young people. In this seemingly desperate context, a range of alternative economic experiments have proliferated across the globe that present a different, ecologically sustainable and progressive model of exchange, which breaks from this cycle of debt driven growth. The Komun map, for example, shows nearly a thousand places accepting FairCoin and social currencies globally, a number which is steadily increasing. FairCoin -and hence FairCoop- has a significant and growing role to play in this story, because:

The majority of stories collected have come from Spain and Catalonia: in Albacete, Tarragona, La Safor (Valencia), Murcia and La Garrotxa (Girona). But productive links with other social currencies have also been developed: MACAO, in Milano (Italy), and in Berne (Switzerland).

Here we try to summarise these broad ranging experiences to see what lessons we might take from these exciting cases for other local nodes seeking to work with social currencies. Drawing out several key aspects across different cases and stories: face-to-face relations of trust around shared values, coordination and collective planning to address people’s needs, physical location and local autonomy, are all crucial ingredients to consider.

However, in several different cases, a general suspicion towards cryptocurrency amongst some users of social currencies was noted, which is unsurprising given the speculation and all the capitalistic excitement about Bitcoin in the mass media. The ‘tech barrier’ means that many people do not feel comfortable with downloading wallets and using cryptocurrency, and this was a challenge in several different places. From looking through the collection of experiences of working with different social currencies, it becomes clear that FairCoin is more a social than a cryptocurrency, which works best through shared values, proximity and face-to-face relations of trust that are built outside of capitalist relations of exploitation.

The attitudes towards cryptocurrency are also rather different in different places though: For example, in the Swiss context there was already a high level of interest in using crypto and crypto investments, while in MACAO, through Commoncoin, there has been a longstanding engagement with using alternative cryptocurrencies to create political and organizational alternatives; although in other places such as Murcia, there has been some resistance to using cryptocurrency amongst those using the social currency, the Osel.

Thus the situation clearly varies on a case by case basis, this is potentially a strength of FairCoin as a social crypto, which is that it can have an attraction both for some socially conscientious users of cryptocurrency and also work well with social currencies, but this strength also presents challenges, given the suspicion in some local contexts about cryptocurrencies. It is also worth stressing that FairCoin is a tool to strengthen alternative, non-capitalist values, based on trust rather than seeking to absorb different social currencies into any single overarching project. FairCoop and FairCoin can be important in helping to build links between different locally based social currencies, always working according to the principles of radical local autonomy.

Social currency and FairCoin: A long-term process of forging links

What we also see in this transition stage, is that the exchange to fiat currency remains a necessity for many merchants, and the process of linking between FairCoin and social currencies must be carefully planned because there needs to be exchange in both forms for these links to be sustained over time. That said, when these conditions are met, there are a number of cases of important and productive links being built. FairCoop and FairCoin are part of a political movement to create a common means of exchange that works in people’s interests, outside of a capitalist system that is based on exploiting people and the natural environment for profit. How we generate further links with different social currencies around these alternative values in different places will continue to be an exciting and - as can be seen from the cases mentioned above - an important and collectively rewarding task in the years to come.